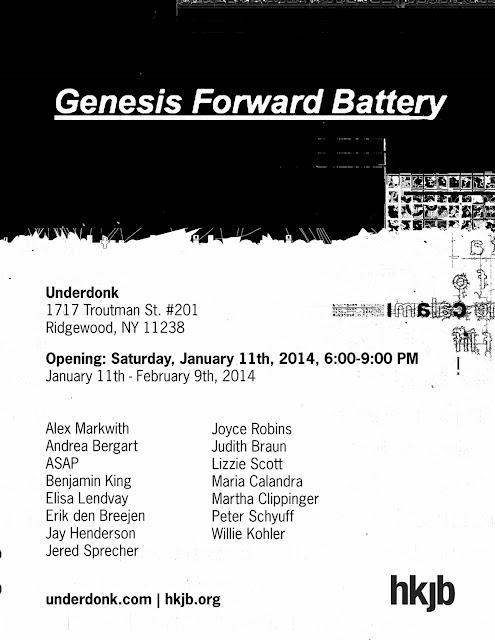 
Showing at Underdonk, HKJB is pleased to present Genesis Forward Battery. GFB is a response to End Times, HKJB's last show, which marked the calamity and confusion of making art today when so many aspects of life are breaking down and rapidly changing. The distinctive and fully formed nature of the objects we picked for ET created a kind of world filled with beauty, confusion, and discomfort, an edge of the cliff scenario in thinking about what will be valuable in the future.  From this valley of abrasion, Genesis Forward Battery is an ascendant line seeking the (sub)cultural starting point(s) in abstraction, figuration, and conceptual modalities. This show points out art rules in play that value an intuitive and human-made sensibility. GFB shows how these artists have found a way for themselves, endlessly recharging their proverbial batteries with tactics they use to create new beginnings again and again. These artists' individual discoveries fuel their visual self-propulsion systems of art making. In a sense, the individual artworks they create are the genetic codes that generate their larger bodies of work. Latent within these codes may be rules and parameters that serve as a genesis or starting point, for their studio practice. Yet, these codes are not deterministic, but flexible and guided by an ineffable sense of wonder.

HKJB is a nomadic artist driven curatorial project co-founded in 2009 in New York City by artists Benjamin King and Jay Henderson. HKJB has participated in exhibitions at Participant Inc. (NY), Exit Art (NY), Silvershed (NY), Neter (Mexico City), and Laroche/Joncas (Montreal), in addition to short term studio based exhibitions across Brooklyn, and was included in the EXIT Art / MIT press publication in 2012, Alternative Histories: New York Art Spaces 1960-2010. HKJB is interested in inviting a cross-generational group of artists together into exhibitions where the larger relational and societal contexts that surround their work can be investigated and appreciated.

Underdonk is an artist run collective, formed in the Summer of 2013, dedicated to showcasing the work of emerging and established artists, as well as providing a platform for realizing creative projects. Genesis Forward Battery will be the sixth show hosted by Underdonk, and the first collaboration with another artist collective. Underdonk is comprised of Chris Bertholf, Tryn Collins, Nicholas Cueva, Aleta Lanier, Jaeeun Lee, Laura Frantz, JJ Manford, Nicholas Moenich, and Elisa Soliven.

Genesis Forward Battery will be showing between January 11th - February 9th, 2014 on Saturdays and Sundays from noon - 6 PM, and by appointment. 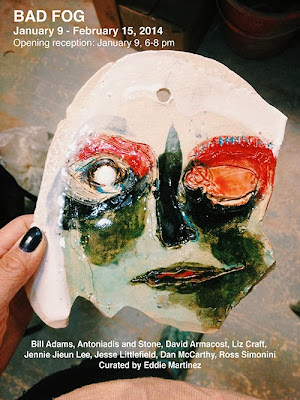 Posted by jayhendersonart.com at 9:41 PM No comments: